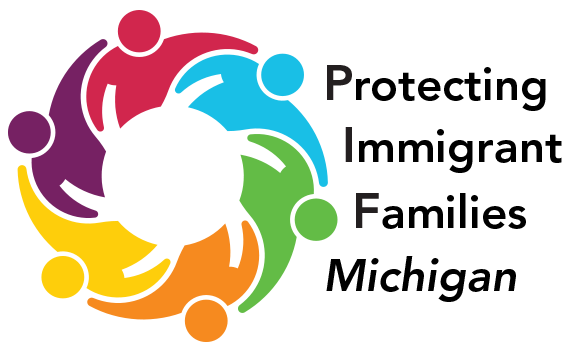 The Protecting Immigrant Families Michigan Campaign is part of a national network anchored by the National Immigration Law Center (NILC), the Center for Law and Social Policy (CLASP), and a steering committee of 15 other member organizations. The “Protecting Immigrant Families, Advancing Our Future” (PIF) Campaign is made up of hundreds of diverse organizations across the country. Our mission is to unite to advance, protect and defend access to health care, nutrition programs, public services and economic support for immigrants and their families at the local, state and federal level. The PIF Michigan Campaign consists of the Michigan Immigrant Rights Center, The Michigan League for Public Policy, Detroit Hispanic Development Corporation, Voces, African Bureau of Immigration & Social Affairs, and the Arab Community Center for Economic and Social Services.

The PIF Michigan Campaign started in 2018, in response to fighting against Trump-era revision of the public charge rule - a cruel policy that created a "wealth test" which threatened the health, nutrition, and housing of millions of families. During the public comment period of the proposed role the campaign generated over 30,000 public comments in opposition to the rule. Since then, the campaign has focused on public education, community outreach, working with state and federal departments and officials.

RECENT UPDATE: On March 03, 2021 the U.S. Department of Justice (DOJ) decided to stop defending the Trump-era public charge rule. Not long after, the Supreme Court dismissed the pending appeals, and the 7th Circuit dismissed the government’s appeal as well! This means that the final judgment entered in the Northern District of Illinois on Nov 2, 2020, which vacated the public charge rule nationwide is now in effect. In other words, the Trump Administration’s 2019 public charge rule is permanently blocked, nationwide. This means that the Trump-era public charge regulations are no longer in effect. DHS/USCIS will follow the policy in the 1999 Interim Field Guidance. Under this policy, it is safe for immigrants and their families to access health, nutrition, and housing programs for which they are eligible.We hope we’ll then see communications by DHS and the White House that explain to immigrants and their families that the policy has been reversed and that it is safe to access health and nutrition programs for which they are eligible without fear of immigration consequences. We also hope to see DHS quickly develop and issue new public charge regulations as soon as possible to ensure a more permanent change. For a detailed timeline on public charge rule please see timeline.

WHAT WE KNOW: On March 13, 2020, USCIS announced that COVID-19 testing, prevention, treatment, or vaccines would NOT be used against immigrants in a public charge test. This means that immigrant families should seek the care they need during this difficult time.

PIF MI calls on working with the Michigan Department of Health and Human Services (MDHHS) and Michigan Attorney General to continue to improve health care access for Michigan’s immigrant families, by engaging with state and local nonprofits to inform families that the Trump-era “public charge” regulations are no longer in effect. (08/23/2021)