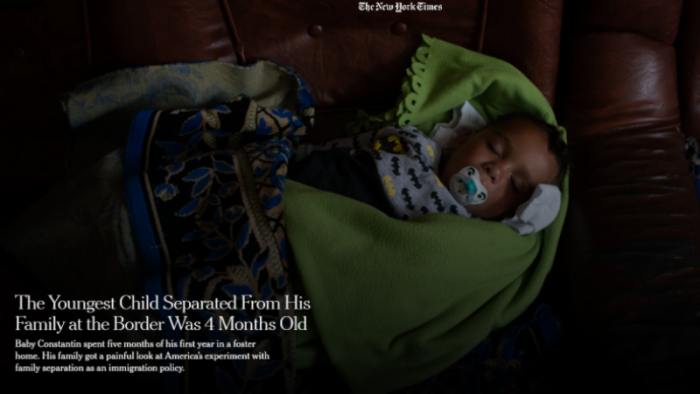 In May 2018, the Trump administration formally announced a “zero tolerance” immigration policy and began prosecuting nearly all adult immigrants illegally entering the United States on misdemeanor charges. As a result, the U.S. government removed any children from these immigrants’ care and placed the children in shelters or federal foster care. This practice of family separation was also enforced against parents applying for asylum at U.S. ports of entry.

Under this new immigration policy, the U.S. government reported that nearly 3,000 children were forcibly separated from their parents between May and June 2018. Yet, we know that May 2018 was not the beginning of family separation--hundreds of children were separated from their parents at the border before the official announcement. In fact, MIRC saw affected clients before national attention focused on the crisis and began collaborating with class counsel from the ACLU in the Ms. L v. ICE case.

One prominent example of an early family separation case was that of the youngest known separated child, Constantin Mutu, who was four months old when we met him. You can learn more about his family's story in this week's episode of "The Weekly" from the New York Times, available on Hulu. MIRC team members Ana Raquel Devereaux and Camila Trefftz make an appearance in the episode. We are so grateful to our baby client's family for sharing their story and allowing us to share the role we played in it.

MIRC represented every child placed in Michigan who was separated from their parents while the official zero-tolerance policy was in effect. We're relieved to report that all of these children were reunited with their families by October 23, 2018. This was not the end of the family separation crisis, though. Even after the federal judge in the Ms. L case ordered the government to end this practice and President Trump rescinded the policy, family separations have continued. MIRC continues to represent every child brought to Michigan to ensure their legal rights are protected.

With support from our funders and other supporters, MIRC has increased capacity by hiring ten new staff attorneys and six other new staff since November 2016. MIRC is now a program of 30 staff, including attorneys, intake coordinators, legal assistants, policy staff, and an expanded leadership team. This capacity-building allows us to respond not only to the family separation crisis, but also to other significant efforts to restrict the rights of immigrants in this country. For example, MIRC now fields free calls from every detainee and every respondent in immigration court in Detroit. They are each given our intake number and MIRC provides legal information, advice about their rights and options, and/or referrals. This was not possible a year ago.

We are grateful to our funders, supporters, partners, stakeholders and community advocates who make it possible for us to respond to recent attacks on our immigrant communities. Right now, we’re preparing for the next potential crisis (possibly in response to government actions described in President Trump’s tweet on Monday). Whatever comes next, MIRC will be ready to respond to and lead against the administration’s challenges and affronts to rights of Michigan’s immigrants.

Are you looking for assistance from immigration lawyers? Do you have questions about your rights as an immigrant in Michigan? Call (734) 239-6863.