The Challenge of Undoing Unwelcoming 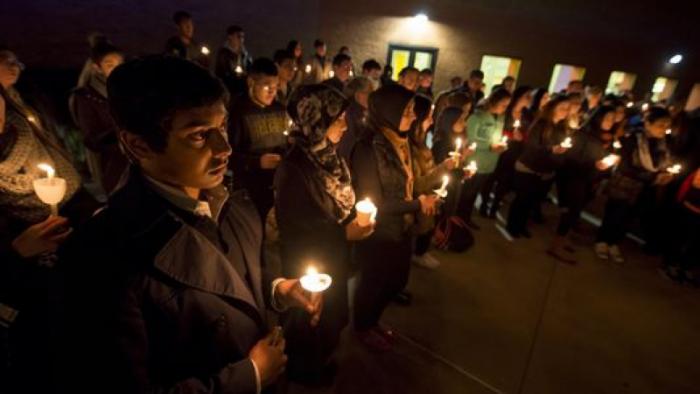 A candlelight vigil Monday night outside the University Center at the University of Michigan-Dearborn honors the victims of the Paris attacks. David Guralnick / The Detroit News

This has been a difficult week for us at the Michigan Immigrant Rights Center as we lead our Welcoming Michigan initiative.  I do not mean to compare our experience in any way to that of the victims of the horrific attacks in Paris or Beirut.  It isn’t comparable.  But we have been feeling shaken in our own way.  Our initiative has received significant attention and positive regard from Michigan Governor Rick Snyder in the three years since our launch, and we have appreciated it.  Governor Snyder’s annual proclamations and frequent highlighting of our work has made a difference.  He has helped us make it clearer that when Michigan welcomes immigrants, Michigan thrives.  Governor Snyder has described himself as the most pro-immigration governor in the country. He established the Michigan Office for New Americans in 2014.  In September of this year, Governor Snyder announced to the state’s Commission on Middle Eastern Affairs, which he created, that he was exploring formal ways to bring more Syrian refugees to Michigan and his office has actively engaged with many in the nonprofit refugee resettlement community to further that vision.  Governor Snyder’s unique steps to encourage refugee resettlement got national attention.  But this week, we saw Governor Snyder’s public statements set off an unprecedented wave of state governors seeking to ban completely refugees from their states.  Although he attempted to clarify that he had really only been able to say he was suspending refugee resettlement efforts as a Governor because he himself had first enthusiastically engaged in those efforts, it didn’t seem to take.  State governors confronted with the news that they don’t have the authority to actually ban refugees began calling for Congress to give it to them.

A bill is now making its way through Congress that would require the Director of National Intelligence, the Director of the FBI, the Department Homeland Security, to personally review, come to agreement, and sign off on the admission of each and every Iraqi or Syrian refugee.  This would make resettlement of refugees from those countries practically impossible.  No one can predict what any individual person might do in the future with perfect accuracy, but our current refugee screening process is already extremely robust and effective.   Welcoming the stranger, particularly the one who is running for her life, is a central concept in the Judeo-Christian tradition.  We tolerate far greater risks every day to further much less closely-held or supposedly broadly agreed-upon values.  As part of the wave of governors who made statements this week seeking to bar refugees from entering their state, New Jersey Governor Chris Christie emphatically included “orphans under the age of five” among those who should not be granted protection and safety and among us.  I can only think of the  photo of Syrian three-year-old Alan Kurdi who drowned in August when I hear that absolute rejection of the notion that even the smallest risk is worth taking to save the life of someone so vulnerable.  Baby Alan and his brother and mother died on their journey after his aunt’s struggle to bring them to join her as refugees in Canada failed.

Refugees, Muslim refugees in particular, have been unpopular in certain circles for a very long time and those are circles the Governor moves in.  So, I suppose I assumed that he had already weighed and understood the relevant political and security concerns when he decided in September to make such a strong statement in support of Syrian refugee admissions to Michigan.  That’s why I expected him to lead in the moment of crisis created by the Paris attacks.  I expected him to reassure the public about refugees and refugee resettlement.  I expected him to remind us that horrible violence in Paris is what the Syrian refugees are running from.  That’s why I was so stunned when instead, he stepped back in such a highly visible way.  If he had new doubts, I would have expected him to consult the many subject matter experts inside and outside of state government that stood alongside him in September.  He has direct access to many people who could have provided the reassurance he was seeking. On October 16, I myself sat in Lansing with hundreds of nonprofit and faith-based refugee advocates and many state officials (including the director of the Michigan Office for New Americans) at the annual conference of the Michigan Committee for Refugee Resettlement. We heard detailed in-person presentations from a high level U.S. State Department official and the director of the federal Office of Refugee Resettlement about the mechanics of refugee processing and the rigorous security screening process.  Why with this wealth of internal capacity and direct connection to federal experts did the Governor choose to seek information in a public letter addressed to Secretaries Kerry and Johnson and post the letter on his official Facebook page where hundreds of hateful and racist comments about Syrian refugees and Muslims in general have now been made? The Governor has indicated that he sent the letter on his own initiative and not in response to a public challenge from State Representative Gary Glenn (R-Midland) to reverse his call to relocate Syrian refugees in the state.

There is an opportunity for learning here about the work we have to do as an advocacy community.  We have to make sure that those who would become our allies see immigrants and refugees as subjects in their own lives, not mere objects in the lives of Americans.  When we have allies who understand immigrants and refugees as a means to an economic end rather than equal partners in seeking shared prosperity, we can get disastrous results.  It's true that on the whole, immigrants and refugees contribute economically and that's an important part of our message.  It will be especially important to many policy makers.  But those who value our communities for solely or primarily economic reasons will not hesitate to put us back on the shelf when they perceive that the cost of standing with us has risen.   Abandonment can be as bad as any opposition.   I believe the Governor failed to understand the complex context that immigrants, refugees, and in particular Michigan’s Arab-American communities have to deal with in our state and this country. I hope he will commit some of his brand of relentless positive action to undoing some of the damage that misunderstanding has done. I hope he will find new ways to support the many tireless advocates and committed organizations he has expressed prior support for in spite of the critical words and witness we are called to in the midst of this failure.  But to be successful in achieving his vision now, he's going to have to convince a lot of Michiganders who cheered his actions this week that he was wrong to take them and that those who have followed him were wrong to do so.  He has made it much more difficult for himself and immeasurably more difficult for us to be Welcoming, but we will continue on.

Are you looking for assistance from immigration lawyers? Do you have questions about your rights as an immigrant in Michigan? Call (734) 239-6863.